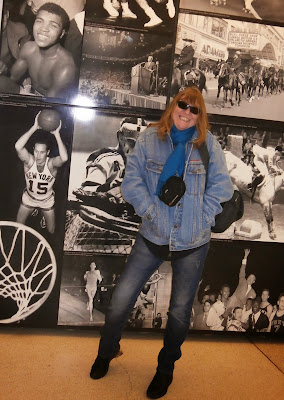 Whether it's a poetry reading, creative writing workshop or talk, join me along the way between Cumbria and New York - September 2013 - 2014, where I'll be reading with poet friends, old and new!

FROM BOLTON TO BRANTWOOD, SWARTHMOOR HALL TO HOADFEST AND A MEDIEVAL FAIR AT FURNESS ABBEY
Summer 2013 was a brilliant time of workshops and readings with friends in the UK and special guest poet from New York, George Wallace. 2014 looks like it's also going to be a bumper year for readings, workshops and talks, so come and join me! You can read about the 2013 gigs here:
http://geraldinegreensaltroad.blogspot.co.uk/2013/09/from-bolton-to-brantwood-hoadfest-to.html

May:
Poetry reading with music for ‘Write to Roam’ group – date and venue to be arranged

Possible trip to the Mid West and Philadelphia (tbc) 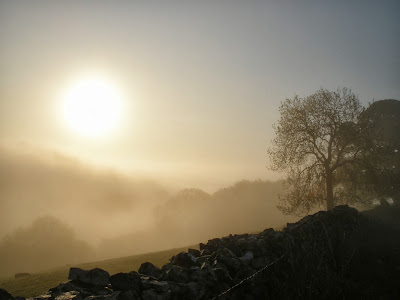 www.indigodreamsbookshop.com/#/geraldine-green/4579511138
Posted by Geraldine Green at 09:50 No comments:

From Bolton to Brantwood, Hoadfest to Swarthmoor Hall and Jane's farm, near Kirkby Lonsdale - 2013 a Summer of Poetry 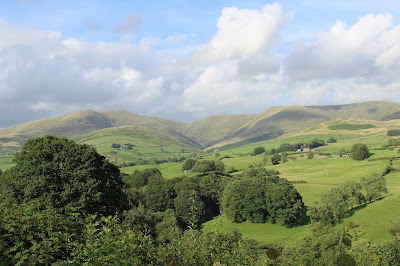 From Bolton to Brantwood, Hoadfest to Swarthmoor Hall and Jane’s farm, Kirkby Lonsdale the summer of 2013 proved to be one of creative writing workshops, talks poetry readings – and swims!

“WALKING STORIES” - SOAKED BOOTS, PUDDLE-JUMPING AND A LOT OF LAUGHS:

It started with a full day creative writing workshop at Jane’s farm, near Kirkby Lonsdale. New York poet George Wallace came over for a couple of weeks in August to co-tutor on workshops, share readings and give a talk or two. As I say, the first one was at the farn, tucked away between Kirkby Lonsdale and Kendal, on quiet back lanes up in the dales. George arrived on the Friday and was plunged straight into the 10-day tour, literally plunged as it poured down all day.

He led the group in the morning, inside the farmhouse, beside a roaring log fire in the wood burning stove. Outside the rain lashed it down. I took the group outdoors for the afternoon session, persuading George to join us. ‘Crazy! You guys are crazy! It’s RAINing and you are WALKing outSIDE!?”

Yeah, come on! It’s fun! Apart from being galloped up to by inquisitive cattle and a frisky horse, we were fine, plodging through puddles and over the bracken-soaked hillside. I had the idea of reading a poem while we were outside, ‘Rain at Birdoswald’ by Frances Horowitz… beautifully read by Barbara, although the paper was soggy by the time she’d finished. 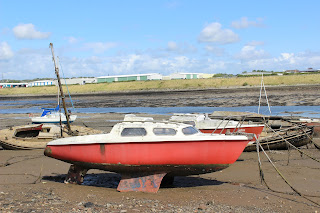 So, after going native the first day, George was then shown the sights of Morecambe Bay, wading into the mud, barefoot, eating samphire. my husband Geoff, Roy-dog and I showed him around Walney, where George Fox landed in the 1600’s only to be stoned by the inhabitants of Walney. We picked blackberries in the sunshine at North Scale, went to South Walney Nature Reserve and next day visited Sedbergh and Briggflatts – "have you read Basil Bunting’s poem of that name? No? Here it is!"

BRIGGFLATTS, A PLACE AND TIME OF QUIET REFLECTION 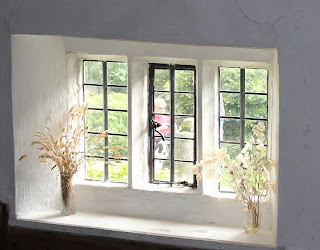 One of our breathing spaces between the busy schedule was a visit to Briggflatts Quaker Meeting House, a tranquil setting in the valley bottom. What struck me about it was the sense of many people's hands rubbing the warmed smooth wooden rails and banister; the embroidered tapestries, old maps showing places Fox visited on his journey North-of-the-Sands. The garden, too, a place settled in pollen-dusted time, a place of calm to reflect on busy times behind and ahead.

It's a place down in the valley in contrast to the long climb up a single track lane to Firbank Fell and Fox’s Pulpit, where Fox sat outside while the preaching went on in the church. Until people left the church and came and joined Fox, outside - over a thousand of them, up there on the peaceful fellside, reached through a farmyard that's roped off at milking-time.

All grist to the mill for George’s talk on Whitman and Fox the following Tuesday at Swarthmoor Hall. 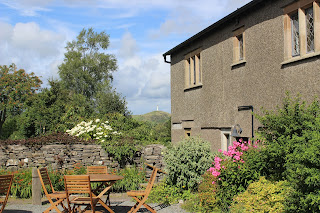 Over 40 people came to the talk on a clear sunny August evening at Swarthmoor Hall. It was my first public event as writer-in-residence at the Hall and I enjoyed sharing my poem ‘Walt’ as part of the introduction to George’s energising riff of the links between Fox and Whitman, the Beats and contemporary poets.

Fox visited Long Island a few times, accompanying William Penn, preaching at Oyster Bay, Flushing, Riverhead and on into Connecticut. Whitman’s mother was a Quaker and more than one person has written about the links between Whitman’s poetry and the vision of George Fox.

Whitman himself said this about Fox:

"George Fox stands for something too—a thought—the thought that wakes in silent hours—perhaps the deepest, most eternal thought latent in the human soul. This is the thought of God, merged in the thoughts of moral right and the immortality of identity. Great, great is this thought—aye, greater than all else.” - Walt Whitman 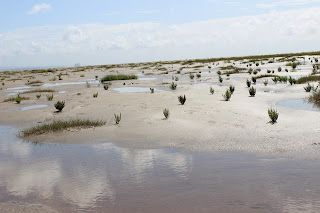 An energising talk on the spirit, or light, or ‘holiness’ – whatever name you want to give it – within, George ended his talk with Allen Ginsberg’s poem ‘Sunflower Sutra’, extract here:

“So I grabbed up the skeleton thick sunflower and stuck
it at my side like a scepter,
and deliver my sermon to my soul, and Jack's soul
too, and anyone who'll listen,
--We're not our skin of grime, we're not our dread
bleak dusty imageless locomotive, we're all
beautiful golden sunflowers inside, we're blessed
by our own seed & golden hairy naked
accomplishment-bodies growing into mad black
formal sunflowers in the sunset, spied on by our
eyes under the shadow of the mad locomotive
riverbank sunset Frisco hilly tincan evening
sitdown vision.”

Wednesday morning saw us head off to Bolton for a visit to the Bolton Museum and Archives to meet the wonderfully attentive and accommodating Julie, to show us the collection of Whitman memorabilia. You can read a little about the visit here:

And of the links between Whitman and Bolton here, courtesy of Paul Salveson:

We enjoyed an afternoon of creative writing with the Bank Street Writers and our host Rod Riesco, much laughter and clapping at some of the extracts George and I read, including a poem by Vachel Lindsay, which George suddenly sprung on me to read! I thought oh well here goes, give it some welly! I loved reading it, wow! Wished I’d written it:

Here’s some extracts, I think I may have added an extra toot or two when I read it: 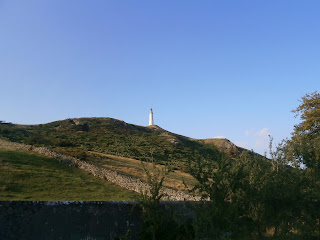 Thursday was the Poetry in the Park event at The Coach House Café, Ford Park, Ulverston. Another evening of sunshine, a full moon later, bats flickering and clicking and Hoad monument lit up as it grew dark. A crowd of around 40 people joined us on the rooftop terrace – too lovely an evening to read inside. We called it HoadFest and plan another event in June 2014 – watch this space!

Ann Wilson wowed us with her warmth, wit and offbeat charm – love you Ann! George belted and pelted the night sky with New York electricity and dazzle and all those who signed up for the open mic performed brilliantly, engaging the audience, drawing us all in…. I paused before I read one of my poems and pointed at the moon – as you do, in the middle of a reading – but hey! It was rising, the moon, not the reading, pink and gold and full, a bubble in the east. Look at the MOON! All turned their heads, wowed and ooh-ed as Ann said ‘c’mon! let’s all howl at the moon, after three one two THREE! A-WHOOOOOOOO A WHOOOOO!

Then it was back to poetry. Oh, I forgot to mention we waved at people scrambling down Hoad’s in the dusk.

A Long Island newspaper picked up on the Evening Mail’s spread about the poetry reading on the roof: 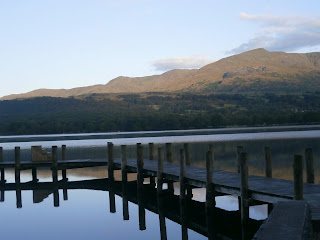 So, a deep breath before setting off to Brantwood the following morning, Friday, to co-tutor a poetry course ‘Sense and Place at the wonderful Brantwood, home of John Ruskin. (Yes, I have to pinch myself, typing this, that we fitted so much into a short space of time).

Remarkably the weather held and I packed my swimming costume – ever the optimist – I was fortunate to have two other keen swimmers on the course that George and I co-tutored. Imagine, poetry not only inside Brantwood, in the Schoolroom, but having all those beautiful grounds to wander in, down to the lake through the herb garden; up to the Professor’s garden, Painter’s Glade, Ruskin’s Pond and the Lodge itself where the participants stayed – and did I mention the food!? No? Well, check out Jumping Jenny’s restaurant and you’ll see what a perfect place Brantwood is for inspiration, food for the soul and body.

One of the highlights of our time at Brantwood, apart from early evening and morning swims, was the outdoor writing session or 'point to point' as george calls it. This is where writing is done in response to the outdoors, the physical world around us, engaging with sense, writing a plein air 'in the moment' at a pre-chosen set of stopping points. Describing what you see, hear, feel, taste, touch and smell. Choose some particular object and simply describe it. What is it? What is it not? What does it remind you of? What are its associations for you? After this session comes time for quiet writing and reflection, sharing what's been written during the evening poetry reading.

A lively and enthusiastic group of nine, plus a couple of their partners came along, too, for bike rides and fell walks, and it made for a party-time atmosphere from Friday afternoon through ‘til Sunday lunch. Big thank you to Rachel at Brantwood and also to the participants.

If you missed this year’s creative writing courses at Brantwood, don’t worry, we’ll back next June and November for more. Co-tutoring with George June 21st-23rd 2014 and a Writers Retreat November 7th-9th 2014 with me, and a guest poet (to be confirmed).

I’ve already collected in some of the poems and photos written in response to the weekend and will share them with the group only, to celebrate a weekend of camaraderie and creativity at Brantwood, a very special way to end a wonderful 10-day August ride on the Kallyope.

And if all this wasn't enough, after George returned home to New York, on August 31st I read in the Chapter House, Furness Abbey, part of the brilliantly organised Medieval Fair - thanks to English Heritage and Gill Jepson, another local writer (check out her 'Out of Time' series of adventure books) 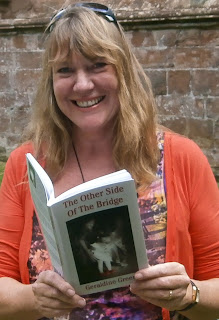 February/March/April/May/June: - ‘Write to Roam’ Jane’s Farm dates to be confirmed

May:
‘Write to Roam’

My next collection ‘Salt Road’ will be published this autumn by Indigo Dreams, if anyone would like to book me for a reading, workshop or join me in launching ‘Salt Road’ please let me know, thanks. Posted by Geraldine Green at 10:31 No comments: