'I STOOD ALL AFTERNOON UNDER HEAVEN" 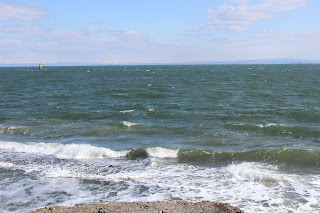 Although I didn't. Stand all afternoon under heaven. I sat and paused, stood, reflected, held my hand out, a tattered rag, swam in my mind with the seal I watched, hopeless, helpless a human animal on land longing for the ease and dip, dive, flow and rise of seal. All afternoon under a sky of blue, after long days of ice and snow and more snow and a wind that blew from the east due to high pressure that has sat and sits and remains seated to the north of the United Kingdom, above us in Scandinavia...and how we want the green of Spring, the green that Lorca sings into us... and how, by entering the landscape of the surreal, into dreamscapes, into myth we can create a world that is of this world and yet not.

A world that helps us understand this one, this real one of flesh blood bone. Weaving stories and myth, creating humans that have the qualities of animals, birds, trees, rivers... metamorphosing our human selves into something other, are ways we can imagine ourselves as something else other than a two-legged creature: being born-dying-resurrected. Our death giving life to soil, worms, birds. Dark soil transforming dead flesh into light, into pollen, into honey that bees collect.

In our dreams we can fly. In our dreams we can view the earth from sky. We can dive under and into oceans, look up with the eyes of sea creatures, see the world through the reflecting dazzling rippling light of sun through water. Dark, light, roses, thorns... always the struggle.

In the poetry and music of Federico Garcia Lorca the world becomes alive with possibilities through struggle. He invites us to step into it, its light and dark, pain and joy, its duende, that dark spirit and primal energy that ignites the Flamenco:

“The duende….Where is the duende? Through the empty archway a wind of the spirit enters, blowing insistently over the heads of the dead, in search of new landscapes and unknown accents: a wind with the odour of a child’s saliva, crushed grass, and medusa’s veil, announcing the endless baptism of freshly created things.” - Federico Garcia Lorca

Lorca has long since been a favourite poet of mine, but I was only introduced to his theory of duende by my supervisor Prof. Graham Mort when I began the PhD in 2009. Here's an extract from that thesis:

“How I want you green”: dreams, myth and metamorphoses

"Lorca uses heightened language in his poetry, for example through symbolic compression in ‘Ballad of the Sleepwalker’: “The fig tree rubs its wind/with the sandpaper of its branches (Lorca in Christopher Maurer 1998: 80).

One’s logical, rational mind says ‘No! The fig tree doesn’t rub its wind!’ and ‘Sandpaper of its what?’ But the effect of such language is to make one look and live in the world differently; instead of the wind brushing against the fig tree, why shouldn’t it be the other way round?

Philip Levine also draws on the use of surreal language in his collection ‘1933’, where in his poem, ‘Once in May’ “He touches life almost at an elevated or psychic level of energy” (Christopher Buckley 1994: 79).

I stood
all afternoon under heaven
with water in my pockets,
salt in my socks, naming
the grains of the sea.

Green, how I want you green.
Green wind. Green branches.
The ship out on the sea
and the horse on the mountain.

Lorca’s poems fuse the folk songs, myth and stories from his Andalusian background and, by use of elemental symbols - such as the moon, waterfalls, fruit, mountain-scapes  and rivers, as well as the human: hair, lanterns, fairgrounds, courtyards and mirrors – his poems have the ability to reach out from the personal to the universal.

He has the ability to take the material stuff of life and imbue it with his emotions and his own personal response to a given situation, whether in his ‘lighter’ more joy-filled poems, such as ‘Reflection’: “Lady Moon/(Did someone shatter the quicksilver?)” (Lorca in Maurer 2001: 55), or in his darker ones such as ‘Landscape of a Vomiting Multitude’ (Dusk at Coney Island) where the repugnance of the narrator/observer is palpable: “There were murmurings from the jungle of vomit/with the empty women, with their hot wax children” (Lorca in Maurer 2001: 215).

His poems are delicate, yet flamboyant; trembling between light and dark, yet never settling on one or the other, but constantly shifting and transmuting. It’s as if he has his ear pressed to the earth or the wind and is listening in to octaves reverberating at a higher frequency than most can hear."

Above is an extract from “An Exploration of Identity and Environment through Poetry” Geraldine Green May 2012, Lancaster University)

Poem of a Mole catcher's Daughter

An old top hat
he’d found
in the hedgerow
pushed back
on his forehead
a whistle
in his hand
his eyes mad
as a blackbird’s
caught in the rain.

His hands fluttering
like birds
his hair listening
to the wind
his mouth
opening and closing
like a baby bird’s.

before they
lock him up again
in the workhouse.

(from "The Other Side of the Bridge" - Geraldine Green, Indigo Dreams pubs.)


Buckley, Christopher (1994). On the Poetry of Philip Levine. Michigan: University
of Michigan Press.