Planning ahead for next year's creative writing course at Dallam Community:

If any of you would like to join me on another creative writing course at Dallam (and I hope you do!), please book through Kerry or Jenny in the Dallam School Office, Heversham:

This course is both suitable for those who have participated in the previous course in Autumn 2017 and for students who are new to the course.

This course is suitable for writers of all stages, especially those who may have writers’ block and need a gentle nudge to get their creative writing juices flowing freely again. Through a series of writing exercises and a variety of stimuli this course is designed to help you put pen to paper and chase the critic off your shoulder that tells you, you can’t write that! This course says yes, you can!

As well as encouraging you to write, whether poetry or prose, this course will also provide group and tutor feedback in a safe and encouraging environment. We will also close read work, poetry and prose, by published writers. 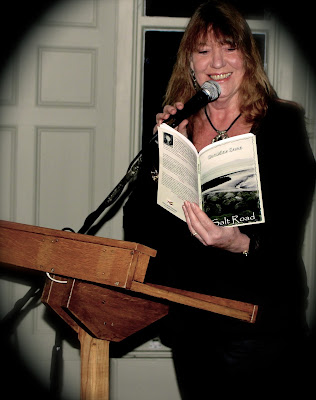 Dr. Geraldine Green is an experienced freelance creative writing tutor, mentor and associate editor of Poetry Bay www.poetrybay.com  She has taught and mentored creative writing at undergraduate level at both the University of Cumbria and also Lancaster University, as well as tutoring adult ed. at Dallam Community and continuing education (online and face to face) for Lancaster University.

In 2011she gained a PhD in creative writing titled "An Exploration of Identity and Environment through Poetry"  from Lancaster University. Her PhD supervisor was the acclaimed poet and novelist Prof. Graham Mort.

Her poetry has been widely anthologised in the UK, US and Italy and translated into German and Romanian. Talks include: ‘On Meeting Lawrence Durrell’, Centenary Celebrations, Corfu, and ‘Ecopoetics: The Works of John Clare and Aldo Leopold’ at The South West Texas Conference, Albuquerque New Mexico. She’s also contributed to Writing Works - A Resource Handbook for Therapeutic Writing Workshops and Activities (Jessica Kingsley).

Geraldine, who frequently performs her poetry in North America, has read at WoodyFest celebrating the music and poetry of Woody Guthrie on a number of occasions, including an extended poetry trip to Oklahoma and Kansas in July 2013; alongside Jack and Adele Foley and Michael McClure, Oakland, California 2009; with George Wallace, Penelope Shuttle, Caroline Carver and Victoria Field on a poetry trip to New York, Long Island and New Hampshire in 2007, with poets George Wallace, Linda Graham and Rhonda Ward in New York City, Long Island and Connecticut 2005.

You can read reviews of Salt Road here:
www.indigodreamsbookshop.com/#/geraldine-green/4565286878

Posted by Geraldine Green at 07:41 No comments:

Black Combe in the distance

The air was full of warblers, or so it seemed to me.Not that I could tell one warbler from another and relied on Jenny of Wilde Ecology and my co-volunteer Phil, to identify what was what in the warbler world. In a day gorse-filled and yellow, in a blustery wind that always seems to blow in from the west on Walney, we made our way through dune paths to salt marshes in the north of the island. 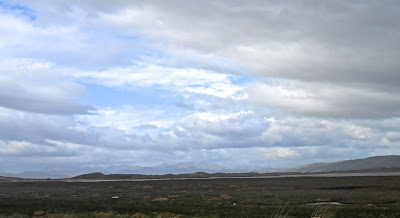 Salt Marsh, looking towards the Scafells

Willow warbler, sedge warbler, reed buntings, bullfinches, grasshopper warbler, larks, couple of oyster catchers, pair of greylags, goldfinches, one curlew, one lapwing displaying, toss in a robin, seven little egrets and there you have it... I was enchanted, listening to the warblers among the gorse. 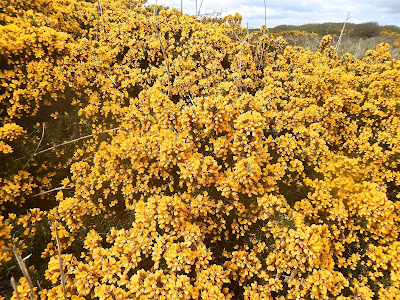 Down on the salt marshes, with views up and out to the Duddon estuary, Kirkby Moors, Scafell range and Black Combe. Closer to hand, slag banks, remains of the old iron ore industry that put Barrow and its shipbuilding on the map.


It's that odd, uneasy (to me) juxtaposition of wildlife, in and out flow of tides, mud banks, quicksands, slag banks, the long industrial road into Barrow on the A590, and close to, a healthy looking dog fox quartering the edge of the salt marshes for voles, frogs, mice...


... it was hunting in and around the goat willows and brambles that separate/join dunes and marsh. We could see it easily with the naked eye. With binocs it was magnificent! Its rich red brown fur stood out against the fresh green. 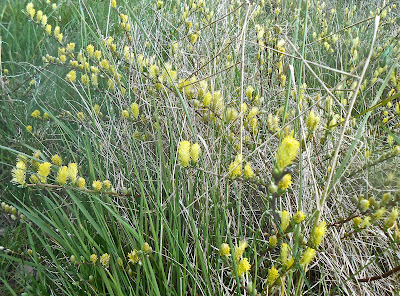 The high pee-wit of lapwing called us to attention, in its display flight, swoops and dives. Acrobatting air. Perhaps the Arctic wind and chill has delayed the displaying and egg-laying of birds... so we'll go again to the wild reserve that sits between channel, slag banks and the Irish Sea.

Birds noted on map of the Salt Marshes, north to south, north is L x 1, with BTO initialling: 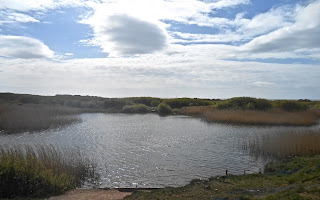 pair of Greylags on quarry pond
Posted by Geraldine Green at 23:59 No comments:

"Writers on the Shore", poems and photos from the workshop I ran South Walney Nature Reserve June 25th 2017 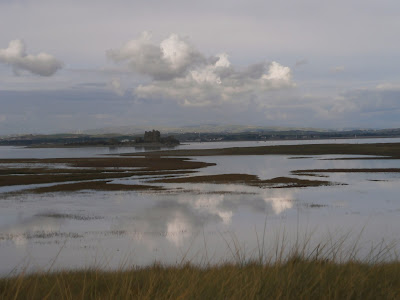 "WRITERS ON THE SHORE"
(with thanks to The Doors, 'Riders on the Storm') 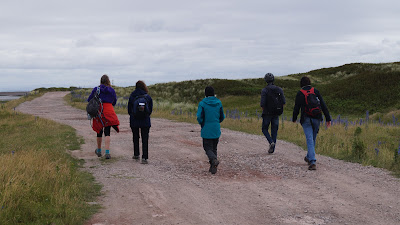 Wander along Walney's coastal path, inhale the sea, taste its salty air -
refresh your creative soul.
Forage for this island's heart beating with the waves - its circulation replenished by the tides...
pulsating with colour even on this grey day.
Peer into grasses, peppered with scarlet pimpernel, yellow horned poppy, red clover, viola...
Turn to see cattle quietly grazing, calves lying amongst blue blur of viper's bugloss.
Gulls noisy overhead, circling.
Grey seals' noses bob above the waves.
Heavy necklace of eider ducks fringe the water's edge.
Hills confident on the horizon melt into cloudy skies. Turbines hesitant, waiting for wind as it gently stirs the marram grass and nudges sailing boats further out to sea.
This island will enter your heart and draw you back for more. 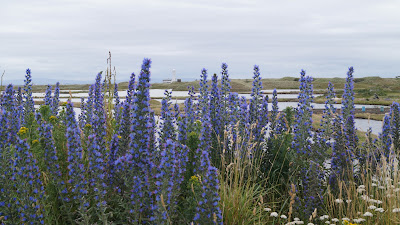 Salt, sharp on the tongue and a wind more March than June

Seals, heads sea–soaked, glistening
bob out of the water
watching us, watching them, watching us
have you seen seals dancing?
sea thrift does, jives among pebbles in lichen coats
an oyster catcher scoots along the shingle
beak and feet beautifully colour co-ordinated

And the sea; an ever present symphony of greys and greens 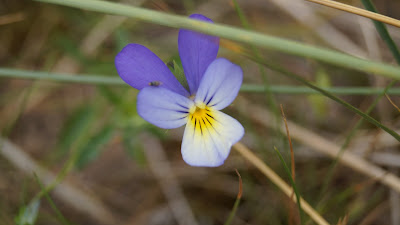 I saw the round of Fairfield
Reflected in the hip bone, hook bone, of a cow;
I saw the square of castle, shipworks and discarded blocks of concrete
And how the blocks were the broken spine of a dinosaur
With vipers bugloss growing in them;
I saw maps of imaginary continents in bright orange lichen on dark rocks. 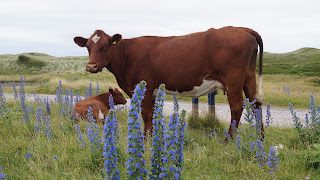 Walney revisited
My emotions ebb and flow along Walney’s paths,
skirted by a calming sea. I taste the salted air;
nourishing my soul, setting free my cares.

This island’s heart beats with the waves; its
circulation replenished by loyal tides.
Land pulses colour, even on grey days.

Heavy necklace of eider ducks fringe the water’s edge.
‘Ooh, ooh!’ they cry - exclamations in
heated conversation, as I wander by.

Grey seals’ noses bob above waves like synchronised
swimmers floating on their backs, then disappear.
I wait, eager for more aquatic antics.

Hills, confident on the horizon, melt into
cloudy skies and shadows of a shipyard. Turbines
hesitant, wait for wind’s power to drive them on.

Walney beams hidden light, lifts my mood, clutching
me to its core. Senses enriched, I’m drawn back
on a rip-tide of memories to its unique shores. 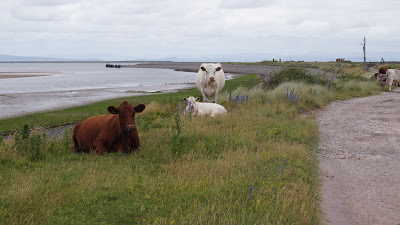 Two of the poems we explored, while at Cumbria Wildlife Trust's South Walney Nature Reserve, and two of the writing prompts:

The calamity of seals begins with jaws.
Born in caverns that reverberate
With endless malice of the sea’s tongue
Clacking on shingle, they learn to bark back
In fear and sadness and celebration.
The ocean’s mouth opens forty feet wide
And closes on a morsel of their rock.

Swayed by the thrust and backfall of the tide,
A dappled grey bull and a brindled cow
Copulate in the green water of a cove.
I watch from a cliff-top, trying not to move.
Sometimes they sink and merge into black shoals;
Then rise for air, his muzzle on her neck,
Their winged feet intertwined as a fishtail.

She opens her fierce mouth like a scarlet flower
Full of white seeds; she holds it open long
At the sunburst in the music of their loving;
And cries a little. But I must remember
How far their feelings are from mine marooned.
If there are tears at this holy ceremony
Theirs are caused by brine and mine by breeze.

When the great bull withdraws his rod, it glows
Like a carnelian candle set in jade.
The cow ripples ashore to feed her calf;
While an old rival, eyeing the deed with hate,
Swims to attack the tired triumphant god.
They rear their heads above the boiling surf,
Their terrible jaws open, jetting blood.

At nightfall they haul out, and mourn the drowned,
Playing to the sea sadly their last quartet,
An improvised requiem that ravishes
Reason, while ripping scale up like a net:
Brings pity trembling down the rocky spine
Of headlands, till the bitter ocean’s tongue
Swells in their cove, and smothers their sweet song.

Writing Prompt: Select 5-6 images/phrases/words and create a word necklace using them. Please acknowledge poet and poem if you keep them in your finished poem. Thanks. Geraldine Green 4.6.2017


An extract from Dunstanburgh
Katrina Porteous

There is a castle by the sea
That no road leads to any more -
On the height of a cliff, the farthest edge
of land, a wind-rucked field;a wall
And gatehouse, ruled across the sky;
A city, seen from miles away;
A promise, pledged in tall stone towers
That, more than battle, passing years,
Winter on winter of wind and rain,
Have battered down to a great ruin;

There's a secret as old As the stones to unlock: There's a riddle, a mystery Trapped in the rock,

And nobody visiting listens or stays
Long enough to tell that the noise
Of the sea on the cliff-face does not cease,
Or to say when the swallows and gulls that roost
In its loud, rocky hollows are suddenly gone
To the tug of winter; and nobody sees
How, in its hours of solitude,
The ruin is endlessly reclaimed:

Writing Prompt: View to Piel Island:  Read ‘An Extract from Dunstanburgh by Katrina Porteous. Prompt: Try writing your notes in a similar form to Katrina Porteous. Use repetition, use the whole white space of the page, have some fun playing with that space! And also the SOUNDS of the word…. What does a mussel shell sound like? What does a rock sound like? What colour is the sound of the wind? What does it feel like to walk into the sea? 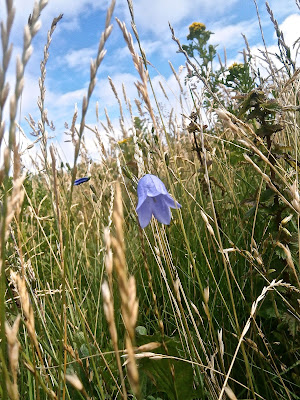 And the seals and the seals and heart's ease and forests of viper's bugloss and always the sea running through our veins and the eider ducks awwww calls of surprising gossip in the marketplace and meadow pipits' song trailing down in a fluteful melody from sky
friends of common mouse-ear, dove's foot cranesbill, sea centaury, sea campion/silene maritima, thrifts/armarium maritima,, pink rest harrow to rest on and wild thyme to dream on ... and the sound of the sea racing back from the bay... 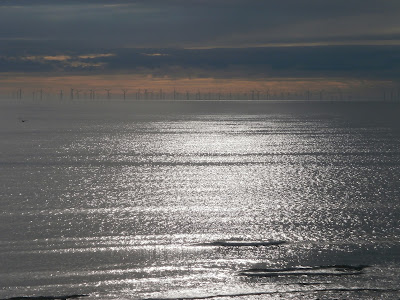 This was a most enjoyable workshop. Thank you Geraldine.
It was great uncovering some of the hidden gems on South Walney Nature Reserve - an inspiring and peaceful place.
Thanks too, to our knowledgeable guide who identified the flora and fauna on the Island.
A great day.
J. Byle

Posted by Geraldine Green at 02:57 No comments: