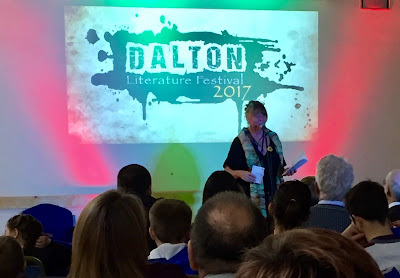 reading 'Shire Horses Mackerel and Memories' from my IDP collection, Salt Road, at the launch of Dalton LitFest, photo by Tom Ashton

But I’m leaping ahead of myself! The launch itself was on Friday 3rd, when poet Kim Moore and I had the pleasure of reading out the winners of the childrens’ poetry and story competitions.

Some of the children came to the front and read what they’d written, stood there: some shy, some confident, some slightly ill at ease, a little embarrassed, in front of the microphone – but they did it! And for me, it was the best part of the evening. It was such a heartwarming moment. Keeping poetry and stories alive through the next generation. 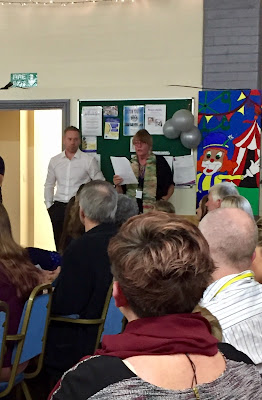 delighted to be invited to read the second section of Sarah Miller's wonderful poem in praise of Dalton, co-written with the people of Dalton. Sarah's poem will be framed and on display in the Town Hall 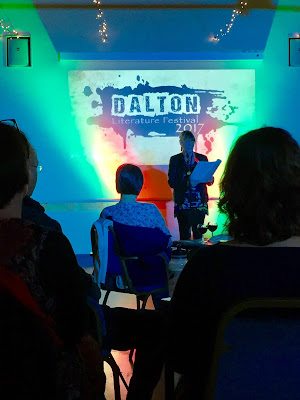 And the following night was the open mic. Would people turn up? Would Kim and I have to read to an empty room? Nope! All was fine! It was a firecracker of an evening, accompanied by fireworks bursting and popping outside. We hosted the event to a packed house with around 11 or 12 people signed up to the open mic, including IDP poet Kerry Darbishire, with Kim and I bookending the evening and with wine and cakes flowing …

… well, the cakes didn’t flow! But the poetry did. From boots marching on their own, taking over the world, to Parma violets, to shovelling manure, to bins and snow, fellsides and birds, cafes, suede jackets, curlews and mackerel,Vickers shipyard and scaffolding – poems came and came…

Big thanks to Festival Director Ron Creer, who first mooted the idea to Kim and me, oh months ago! And to Margaret Martindale whose idea it was to host a LitFest in the ancient capital of Furness, Dalton. To all the writers who took part and to the volunteers, but most of all to the people of Dalton and their children.

Here’s wishing everyone good luck for the next Dalton LitFest!

LIFE IN A DALTON DAY

10
Buzzing like excited bluebottles
They swarm back towards Dowdales

13
Outside the streets become a river of dark blue darting fish
One big school moving together, veering off

14
Where U at? CU in 10
Teenagers move casually from bench to bench
Phones beeping and tapping

photos by Tom Ashton copyright
Posted by Geraldine Green at 23:42