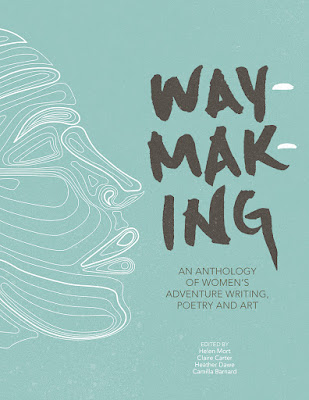 Waymaking, Vertebrate Publishing is now available to pre-order from our website.

Here is the link: https://www.v-publishing.co.uk/books/categories/wildlife-photography-and-outdoors/waymaking.html

The book will be released this October in a timely publication that marks the centenary year of women’s suffrage and ongoing discussions about gender issues in the media, and will feature contributions from over fifty writers and artists, including award-winning author Bernadette McDonald, world-leading climber Hazel Findlay, and adventurers Sarah Outen and Anna McNuff.

While 2018 has seen a surge in books written by women for women hitting the shops, one area still largely underrepresented by female voices is the outdoor adventure genre. As the UK’s leading publisher of outdoor adventure titles, Vertebrate Publishing aims to address this imbalance with Waymaking.

Commenting on the disparity between the number of adventure books written by men and women, Vertebrate’s managing director, Jon Barton said, ‘While we actively seek out female authors and never aim to publish a guidebook without photos of both male and female athletes, the majority of our books are written and read by men. At the moment we’re missing fifty per cent of the voices of adventurers and nature lovers. We hope to redress this balance with Waymaking and inspire other women to get out there and to tell their stories.’

All royalties from the sales of Waymaking will be split equally between the John Muir Trust and Rape Crisis, helping to conserve our wild places and raise awareness for the problem of sexual violence in our society and others. Funding raised via Kickstarter will support production and marketing costs.

Waymaking will be published by Vertebrate Publishing on 4 October 2018.

Posted by Geraldine Green at 10:59