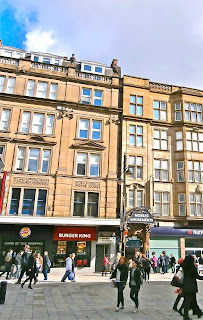 It was great! Loved it. Especially the laughing.

It’s been quite a week, three workshops in the north in the space of a week: Lochmaben, Newcastle and Ulverston – ‘tho today’s “Walking Stories” workshop has been cancelled due to snow and ice. Strange, really, I thought last Sunday’s workshop at Elshieshields Tower would have been a casualty of weather… or this Thursday’s one in Newcastle. But no, I ducked and weaved and avoided the snow, or it avoided me!

The workshop in Newcastle was well attended by writers from the Carte Blanche writing group. Thanks P. & J. for inviting me. Fifteen turned up at the Brunswick Place Methodist Church Hall, tucked down a side lane between Waterstones and Fenwicks. As always I tend to arrive too early, but prefer that as I like to do a recce, sniff my way around unfamiliar territory.

And it is unfamiliar, in the sense that I don’t mosey around cities that much, but when I get the chance I enjoy it. I enjoy people-watching. They look purposeful, busy, intent on to-ing and from-ing from work, home, shopping – or maybe, like me, just being what the French call a flaneur, meandering around the city streets, an easy amble, not knowing where you’re going, looping, doubling back, pausing… why did I take a particular route from Eldon Square to the Methodist Church? Or from the Hall to the Monument Metro station? Did I like the look of a building? What drew me?

Was it the sound of an accordion that pulled me one way and not the other? Or the sight of a fruit and veg stall, full of colour on a chilly Newcastle morning; the calls of the vendor, muffled in scarves and hat, buff and gloves, stamping feet behind a stall piled high with limes, lemons, oranges, aubergines. Some sympathy connects us; some reaching out, an unacknowledged recognition that it’s cold, we have to make a living, whether selling oranges, the Big Issue, poetry or dreams… but we’re alive in this big, bad messed-up mussed-up pulled one way and another world in a mesh of flesh, spirit and bone, pain and joy, rubbing along the best we can.

There was a great turnout for the workshop. Fifteen writers, poets, prose writers, much buzz and anticipation. Fifteen women sharing unexpected, or pondered upon, ideas, thoughts, rhythm, music in words and a lot of laughter. In fact, it’s this energy I took away from the workshop; this laughter over something silly and fun and warm and human and above all, playful.

We can easily forget how to be playful, especially when we get battered on all sides by politicians, seemingly hellbent on destroying not only the planet through climate change and global warming, but also the human spirit. The capacity of humans to experience joy, to share wonder, to respond to the sun’s warmth of spring (when it arrives!) is so uplifting. This capacity of playfulness, of expressing joy at being alive is also shared by our animal and bird friends. Who can’t resist a smile when we see lambs in a field of fresh, green grass, leaping and bounding on rubbery new legs? Or be fortunate enough to see an otter twisting and turning its supple body in water, as if it is water. Or hearing the squabble of sparrows in a hedge, or geese returning...

So precious, this spirit of joy – especially the laughing! 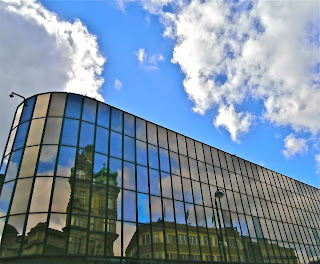 One of the exercises I set was to share Philip Levine's poem "The Fox" I then asked the group to write in response to this line: "I think I must have lived once before, as a ....." (fill in the blanks)

I think I must have lived
once before, not as a man or woman
but as a small, quick fox pursued
through fields of grass and grain
by ladies and gentlemen on horseback.
This would explain my nose
and the small dark tufts of hair
that rise from the base of my spine.
It would explain why I am
seldom invited out to dinner
and when I am I am never
invited back. It would explain
my loathing for those on horseback
in Central Park and how I can
so easily curse them and challenge
the men to fight and why no matter
how big they are or how young
they refuse to dismount,
for at such times, rock in hand,
I must seem demented.
My anger is sudden and total,
for I am a man to whom anger
usually comes slowly, spreading
like a fever along my shoulders
and back and turning my stomach
to a stone, but this fox anger
is lyrical and complete, as I stand
in the pathway shouting and refusing
to budge, feeling the dignity
of the small creature menaced
by the many and larger. Yes,
I must have been that unseen fox
whose breath sears the thick bushes
and whose eyes burn like opals
in the darkness, who humps
and shits gleefully in the horse path
softened by moonlight and goes on
feeling the steady measured beat
of his fox heart like a wordless
delicate song, and the quick forepaws
choosing the way unerringly
and the thick furred body following
while the tail flows upward,
too beautiful a plume for anyone
except a creature who must proclaim
not ever ever ever
to mounted ladies and their gentleman.


fr. 'Stranger to Nothing - Selected Poems' Bloodaxe Books
Posted by Geraldine Green at 05:34