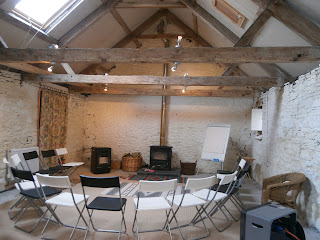 Back from a lovely two days in the Borders. We drove up on Saturday, knowing snow was forecast for Southern Scotland and stayed over at Lochmaben. We had Roy-dog with us so to find a place for a walk was priority. We pulled up at Kirkloch, one of three small lochs that grace Lochmaben. There’s a walk around the loch that takes in the Castle on the far side of it. We walked along passing a carved wooden heron, otter, a large fallen down tree sculpted with giant leaves and the signs which explained the history of place.

Lochmaben, thought to have been named after the Roman god of youth, Mapon. As the sign says (and I’m paraphrasing here, from memory): “2,000 years ago people perceived things differently than we do now. They worshipped water of all kinds.” Well! What a great idea! Maybe we could try perceiving things like that in the 21st century… and our ancestors lived in Crannogs. Or they did on these small lochs. Islands where wooden round houses were created to protect humans from “wolves and bears which lived in these parts then and are now extinct.”

Back to the car for coffee and sandwiches. We sat and watched a heron, striking markings, white neck, clean grey stripes, dark grey wings – they all are slightly differently marked and this was a beauty.

And then to the hotel, which was fine, the accommodation was an annexe in the garden and was warm clean, comfortable – and allowed dogs to stay. We did read a sign, chalked on the blackboard outside saying:‘Karaoke TONIGHT!’ – oh-oh! Nothing wrong with a bit of a sing song… tho' it meant only a couple of hours sleep as we tried to sleep thru 'green green grass of home and 'why why why Delilah!?' (Wales had beaten England in the rugby! It was a good match!) … but the room was warm and clean and the hotel owners very welcoming.

We decided to do a recce, as there was a couple of hours 'til dark, and find Elshieshields Tower which is only a mile or two outside Lochmaben. I’m glad we did as there are a lot of lanes around meandering into the hills and down and alongside rivers… I have to say that it's the perfect place for a quiet retreat, reflection and creative writing workshop, especially one using the outdoors as part of the workshop, as I do. Although the sleet-y rain meant we didn’t stay outside for long!

Six people turned up out of eight, which, considering the weather, I felt was pretty ok. Two live in the hills and were understandably snowed in, the snow falling Saturday and Sunday at higher ground. Participants mostly knew each other from the Crichton Writers, Powfoot Writers, Glasgow University Dumfries Campus – although not all participants had experienced a writing workshop before, so hugs to you who dipped you toe in for the first time and shared your observational skills of birds and empathy.

We gathered around the wood-burning stove, tables and chairs so arranged that the large stove, burning oak and pine logs, became part of the group. An essential part; like our ancestors worshipping water, fire was also a god, or goddess, and a necessary part of survival and social gatherings. I love tending a fire, sweeping the hearth, feeding it, keeping the flame alive… yes, I could worship fire and water, earth and air..

We began with a warm-up exercise, grounding ourselves in the physical, the senses, then moved on to the imagination, before heading into more sustained pieces such as “What does NORTH mean to you?” Then moving on to explore other languages that we may not understand, but can get a sense of meaning from tone, sound, rhythm.

We discussed the importance of paying attention to details, as scientists and naturalists do. One of the handouts I gave the group was this:

The attention to detail that is expressed by these groups is unique. Each one has their own way of silent contemplation, but the end result is overwhelmingly similar. The Sámi ideal, as expressed by Valkeapää, focuses on the cycle of life that I explained earlier.

Bear Heart describes a similar importance of the smaller details and adds a degree of respect. The respect that he writes of is an inherent need in all-living things. Through this observance, one can enhance their own life:

You can’t walk or run all the time. Sit down occasionally and see your surroundings. If you go in and out of a house every day, there may be one particular blade of grass on the lawn that always stands there watching you go by, but you don’t even notice it because you’re preoccupied with getting to work on time. You’re thinking about the traffic, you’re thinking about the day ahead—“When I get to the office I’m going to do this and do that”—and you miss the little blade of grass that stands as a protector, trying in its own way to filter the air so we can all breathe better. The grass and its relatives are beneficial to our bodies, so next time you rush out, stop, look down, and say thank you before you go on. It’s an injection of joy and beauty into your life. That little blade of grass has life just as we have life. Sit down and notice the world around you. (The Wind Is My Mother, pg. 228)

Thoreau’s favorite subject to write and philosophize about is attention to detail. He spoke frequently of the observant traveler, and silent contemplator”

The workshop ended with Em’s home-made soup and bread, Geoff’s flapjacks and brownies, the fire still part of the gathering, warming us as we laughed and chattered, shared info on events, such as the two creative writing workshops I’m tutoring in June and August at Brantwood, one with New York writer George Wallace, the “Southlight” magazine Issue 13 coming soon and the Dumfries & Galloway Arts Festival 2013 - links at the end of this blog.

Here’s one of the poems we shared, read by Vivien Jones:

Fr. TREKWAYS OF THE WIND

And I can hear it
even when I open my eyes

You know brother
you understand sister

Posted by Geraldine Green at 02:00