LARK, LORELEI OF AIR AND SKY 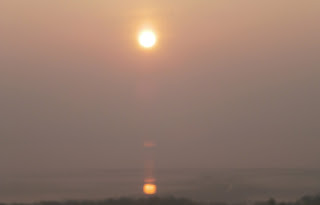 LARK, LORELEI OF AIR AND SKY – jottings from a woman walking her dog

Although it was warm-ish when I fed the birds earlier - amazed to see, peering at me, eye-height through the beech hedge, a mouse parting the leaves - not sure which one of us got the biggest surprise! - it was cool on Birkrigg Common and I thought of John Clare and enclosures, how he'd have loved the wide open space of this common land where larks sing "above below behind beyond", where limestone rocks lie, like sleeping prehistoric animals, some blocks mark a path - or did the path follow those white limestone markers? 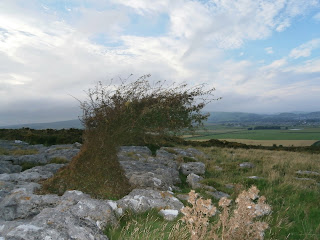 Watched and listened to numerous larks and thought they’re like Lorelei, luring the walker away from their nests and young with their song. Larks, Lorelei of air and sky, Lorelei, lovers of wide open space and freedom

Why Tudors & Elizabethans ate larks’ tongues in aspic is beyond me! Must've been tiny tongues, and how many would you need to make you feel full? and did they believe that eating the tongues would give you good voice, sing matins and psalms, Capella, luminous and clear as the star of that name?

Pondered on free form poetry: roaming and gathering whatever comes along, gathering far and wide instead of harvesting boundaried crops in enclosed fields; thought of imaginative space and travelling to  other places, freedom to dream, the write to roam. Thought of balance between the two, "good, wild, sacred" land as Gary Snyder calls it - which is partly where this thought came from. My roots are in Cumbria, the Furness Peninsula, attached to one place I also love to travel to others, share other people's stories, memories, love of their own patch. Gather them up, write in response, weaving the real and imagined, myth and dreamtime, telling the 'truth', telling it slantwise:

"Whether through poetry or prose, anecdotes or travel notes, the aim in writing ‘Salt Road’ is to share the wonder I feel in my encounters with others on my journey through this bewildering, messed up, yet still astonishing world." (extract from Introduction to 'Salt Road')

Snyder, who states: "for hunting and gathering peoples who draw on that spread of richness, a cultivated patch of land might seem bizarre, and not particularly good, at least at first. Gathering peoples gather from the whole field, ranging widely daily. Agricultural people live by an inner map made up of highly productive nodes (cleared fields) connected by lines (trails through the scary forest). a beginning of 'linear.'" 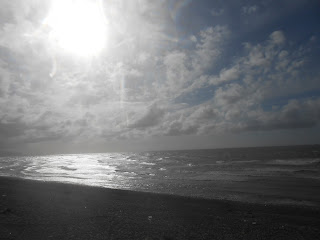 ‘SEA TO THE WEST’

“Let my eyes at the last be blinded
Not by the dark
But by the dazzle.”

Saw the Isle of Man clear in the distance under thin blue sky, while Black Combe's bulk was cotton-woolled in kettle-steam cloud.

For some reason today Birkrigg seemed higher, whether the clouds low down in the middle ground on the fells made a difference, I don't know, but Bardsea village and spire looked way below me to south and east as I swung round on the homeward path to check for Ash die-back on the trees I’d photographed at dawn one morning.

One tree looks as if it has this disease. It's three-quarters in leaf, but leaves and branches at the top and east part of the tree look dead, branches bare.

Before I get back to work, preparing for this weekend's creative writing course ‘Writing the Wild’ at Brantwood and Monday's workshop with children on Walney, - encouraging them to engage with nature -  I must check for Ash die-back in south Cumbria. 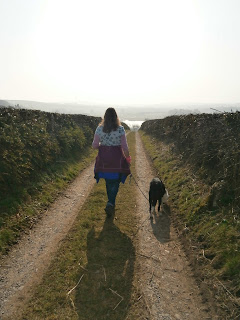 You can sit on any
of these limestone outcrops
watching Meadow Browns land on
harebells, Alpine ladies slippers
or tormentil, listen to the wind
shushing bracken
as you sit sheltered, dog to one side
panting, waiting for a stick
to be thrown.
Listen to larks rising,
pulling scent of thyme from earth,
their song falling like water.

Should you ever get bored with tormentil,
Meadow Browns or harebells, raise your eyes,
look at horses on the horizon.
Sea-Jay or shire mare, Annelise,
or white ones
folding over mudflats and marram
as the tide licks its way
into gulleys and channels.

Don’t be fooled,
it may look as though it’s creeping -
each wave searching
for a foothold
but underneath lies its venom,
quicksand and currents.

Watch it
rush in under the viaduct at Plumpton,
or sit near the hide at the south end of Walney
when it empties the Bay,
returns to the Irish Sea.

Posted by Geraldine Green at 00:19