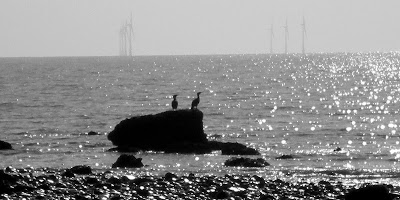 October 21st
I was lucky to have run two workshops with local children’s writer Gill Jepson for Walney schools this summer, and be invited back to run another two this autumn.

The October one was Hallowe’en centred, with ghost stories and plenty of ‘describing words’ suggested by the children scribed on the white board by Lynette – thanks Lynette, great scribe! I did a bit of research and found suitably spooky ghost-stories written by children, for children of the same age. I chose one and read the first few paragraphs, stopping at a spot from which the Walney children could pick it up and write the end.

I also took along a book of food poems for children edited by lovely poet friend Joan Poulson and Kelly Waldek, called “Sling a Jammy Doughnut: A Plateful of Poems about Food”, it’s for Key Stage 1 children and the children are Key Stage 2 but it’s a lively, engaging book and a simply way in to asking the children to write a short poem about their favourite food, its colour why they like it, what it tastes like, looks like and a food they dislike. Some of the group asked if they could illustrate their poems and stories, of course you can, I replied – have some fun!

We had planned to go to the beach but it was tippling down – children, tell me 10 different ways to describe rain! Raining cats and dogs, stair rods, tippling down, throwing a shower, drizzle, lashing, pouring, splattering, spits and spots, pattering, drumming, hammering, torrential, I got soaked, Miss! 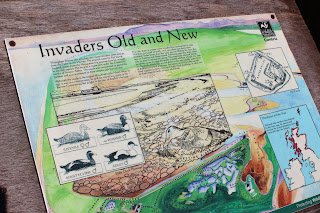 It rained cats and dogs in stair rod torrents Monday morning and mist was heavy over the A590 as I drove to Heversham to tutor my morning Adult Ed. Class. But, thankfully by the time I walked Roy on Bardsea beach it was lifting, and the afternoon at Walney was grey, damp but dry. Yay! Gill and I decided that yes we could take the ten children  to West Shore. Fan-tastic!

The children came in chattering nineteen to the dozen, as a friend describes it ‘they can talk a blue streak!’ – and this lot can! Some a re little bit shyer than others and one who doesn’t talk much can write a great story. One who talks non-stop – very imaginative and intelligently – can’t seem to get those verbal words onto paper. I tell him, you know you’ve all those great ideas in your head, different characters, their names, what adventures they could have – so why not get those words that come out of your mouth onto paper, in writing?

We usually give the group juice and fruit when they come from school at 3.15pm, but today, because it gets dark early, we decided to go to the beach and feed them when they got back to the community centre.

I asked them to collect one two objects – natural, man made – so that when we got back to the centre they could describe them, their shape, feel, sound, touch smell and say what they reminded them of. I spoke with the blue streak chatterer – or he talked almost non stop to me – about wind farms, solar power, bio-mass. There’s a huge wind farm just off Walney in the Irish sea and A. told me it was the second biggest in the world. He thought the first was off the coast of America (must check!). He also said that another one’s going to be built off Morecambe which would connect with the Walney one… we both agreed it would be enormous and could snag migrating birds and were they effective anyway?

I encouraged a new girl to tell me what she liked about the beach. She told me she loved collecting shells and special shaped stones and put them on her window-sill, as I do, so we had a lot in common. She said she could smell the sea from her house if she opened her bedroom window. 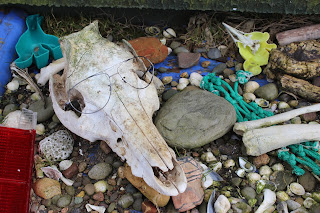 We go to the beach, the recent storms had thrown the pebbles into banks so scrabbling down the wet stones as fun. A lot of seaweed had been thrown up, ribbon weed, brown, orange, deep pink, ruby red… ooh Miss! Is this SKIN? Is it? Ooh don’t TOUCH it! It’s ok, I said, it’s only seaweed, it’s not skin. There was a lot of ‘mermaid’s purses’ also in the flotsam and jetsam; quite fresh, pale orange, yellow and brown, not yet dried hard and black. I’d googled what they were in summer and told the group they were egg cases of Skate fish. We agreed we liked the coiled, spirally, wiggly things on the ends that sprang back if you unwound them.

There are a lot of what my sister calls ‘ghost stones’ on the beach at West Shore; stones that have a holes in them giving them faces, with holes for eyes and mouth. Some have a lot of holes and I asked the children who found them what they reminded them of ‘Meteorites!’ was the favourite answer.

To the sound of the Irish sea coming in, with the loathe them or love them wind farms on the horizon and a seagull or two calling like lost souls or cats (we decided), damp mist and semi-dusk surrounding us as we walked past the golf course down Central Drive and back to the centre.

Juice, apples and bananas, a flinging off of coats and gloves and then getting down to writing! I asked each of them to choose one object they’d brought back – some had brought a lot, some in the corduroy cap I’d found on a wall at Mouzel, Cornwall, but that’s another story – and give me one word to describe it. We wrote the words on the whiteboard, going round the group a couple of times.

Here’s some of the words:

I asked the boy who said one of his stones was ‘tedious’ to tell me why, because it’s dull and boring! What’s the opposite of boring? I asked the group. Bright! Yes, good one! Cacophony!

Cacophony! Great word, love the sound, but why cacophony? Because it means a lot of noises and sounds and things going on and that means it’s not dull or tedious! Yep! Good one!

I asked them to write a short story, poem or cartoon using some of the words on the board and some of their own words that they like. Shyly one boy asked me if he could use the word ‘Riley’ I said yes, of course, but why? What does it describe? Oh it’s well, I like the word and he could have adventures! T. went on to write an excellent story about a boy called Riley who had adventures on the beach and who could run faster than a meteorite… brilliant! 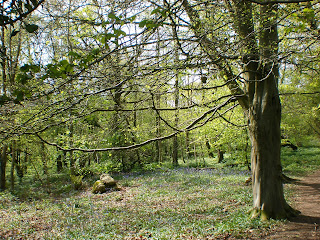 He was the boy who told me he loved walking and his dad took him walking 50 miles! I asked where, he said in a wood. Which one!? thinking that’s some big wood! He said it was the one that was once owned by a wife of Henry the 8th. Lady Jane Grey, I asked him? Yes, that’s right. Uhuh, you mean Bardsea woods.

One girl drew cartoons, neatly using a ruler to create even sized squares and told a story through pictures and words. Another girl carefully arranged all her stones in a circle, then drew them and then asked if she could write describing words for each stone in a circle inside the pictures and also outside the pictures, please miss? Great idea, that’s really good! You can make a circular poem. Big smile on her face.

Another boy said he liked the word Colorado and could it could be the name of a boy who had adventures! Each of the children engaged with the objects, words in their own style – some with great drawings, one boy in particular is a good artist but less sure about words. One girl was a little diffident so I suggested she simply write down four lines describing what she was saw on the beach, what she heard. She did and went on to write more lines.

It’s just finding a way in to get them started, give them confidence and, for me, they drew their ideas from the outdoors, the elements, sea, sky, dampness, smells of seaweed, a very stinky crab’s claw! I told them about how a whale had been found washed up, dead its stomach full of plastic bags… so that’s why it’s important not leave plastic on the beach.

One the way back to the centre one girl told me she loved living on Walney. I asked why. It's near Barrow and I love going to the shops in Barrow. They're great! One boy told me he loved Walney because of the great food and lots of take-aways. All of them were excited about going to the beach and collecting things to write about, objects, ideas, names, adventures, questions... quite a few of their family worked, as mine did, for BAE , formerly Vickers Shipyard. I'm lucky to have the chance to work with these kids. Looking forward to more workshops with Walney schools next term! Thanks Gill!

Walney, an island, connected to Barrow by the Jubilee Bridge, their home. 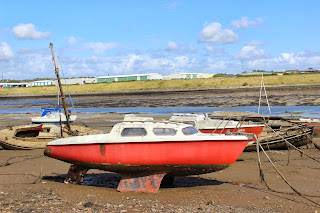 Posted by Geraldine Green at 07:49