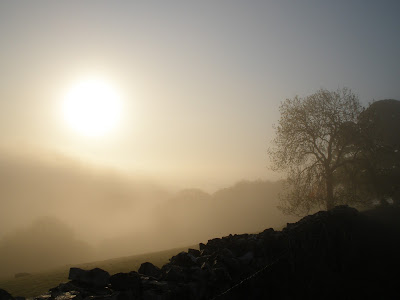 *Stop Press* my third, full collection Passing Through will be published in 2018 by my publishers Indigo Dreams - thank you Ronnie and Dawn Goodyer!

I thought I’d share with you a recap of the past 12 months, some of the  workshops and courses, readings and gatherings I've been involved in and also anthologies I’ve had the pleasure to edit. 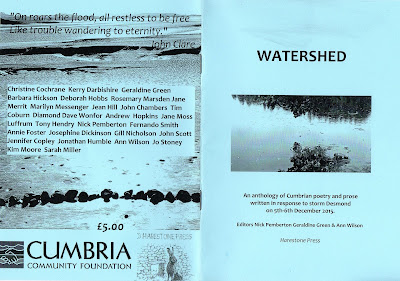 About this time last year, together with two other editors and poet friends, Nick Pemberton and Ann Wilson, we each felt the need to reach out to Cumbrians affected by last winter’s storms. Many of the people affected are still out of their homes, have lost businesses or are struggling in some way to re-build their lives, to tell their stories.

So each of the three of us invited other Cumbrian-based writers to send us a poem or prose piece written in response to Storm Desmond. The result is the anthology WATERSHED published by Harestone Press. So far, through readings workshops, word of mouth, social media, we’ve raised over £1,000, which has been donated to the Cumbrian Community Foundation Flood Recovery Fund.

Here’s a few of the venues where readings to raise money for the Fund took place: Kendal Library, Speak Easy Café Carlisle and Borderlines Festival  also in Carlisle as well as a variety of workshops and readings: 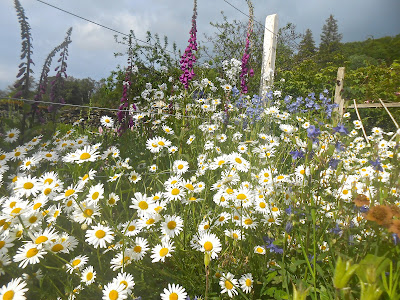 It was a year of a wide variety of projects for me. First off was putting into place what was discussed at a meeting in December 2015 with Brantwood’s Rachel Litten and Howard Hull. As writer-in-residence at Brantwood I was invited to put forward ideas for events to be held there.

I’d heard an interview on BBC Radio Cumbria between Caroline Robertson and Steve Coogan. Steve Coogan had been trapped in the floods and a landslide at Thirlmere during Storm Desmond. During the interview he explained how he’d been trying to get to his cottage at Coniston to check it was ok. He tried all ways to get there but eventually ended up spending the night – eight hours! – trapped in his car round the west side of Thirlmere, in the dark, with his Cockerpoo dog and only fruit and nuts to eat. He said he felt like Bear Grylls only his food was from M and S!

With this in mind I suggested that perhaps Steve Coogan might like to take part in a fund-raising event at Brantwood, to help raise money for the Flood Recovery Fund. I suggested to Howard and Rachel that, as Steve was practically a neighbour of Brantwood and seemed to me a very community-minded person, he might say yes! Anyhow, it was worth a try…

Leave it with us, said Rachel and Howard.

The upshot was a fund-raising evening held in Brantwood café with Steve as guest speaker re-telling his hair-raising experience during the floods. The event was, as you’d imagine!, a sell-out. What a warm-hearted modest person. He started by saying “This isn’t a story of bravery, it’s a story of foolhardiness.”

He was very supportive and open-hearted sympathetically aware of how the floods had affected people in Cumbria and elsewhere. He said at he end of his talk, “If there’s anything I can do to help, contact politicians, help make your voices heard, then let me know.”  The event took place on March 11th 2016. All in all a great evening with a very funny guy and a down to earth one, too. 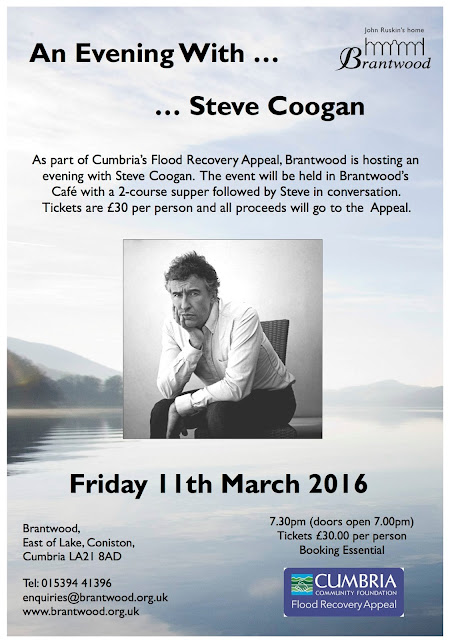 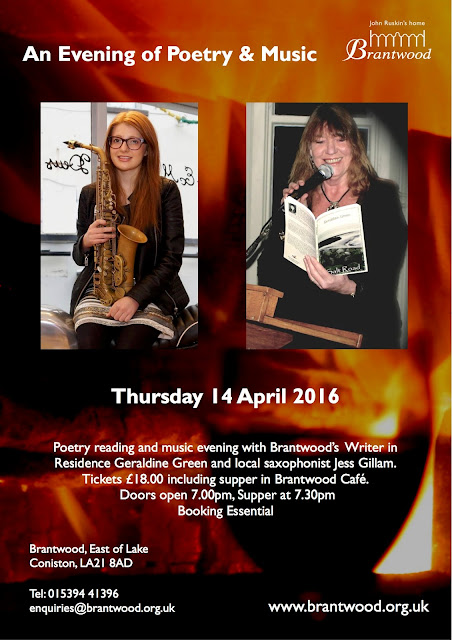 At the December 15th meeting we also discussed the idea of combining an evening of poetry and music. Rachel suggested Jess Gillam, who, like me, is from Ulverston. I said yes, sure! Great idea. She’s fab! Jess is a young saxophonist and impresario. She was runner up at the BBC Young Musician of the Year 2016 and is an all round energetic, enthusiastic person who shines on stage.

The evening of music and poetry was held in Brantwood café on April 14th 2016. It was a beautiful event and a joy to perform alongside the wonderful Jess! Geraldine Green Writer-in-Residence Brantwood teams up with Saxophonist Jess Gillam

As well as continuing to tutor creative writing courses at Brantwood, which I’ve done for the last six years, I suggested a poetry evening with open mic to round the year off, so to speak! I invited Cumbrian-based poets Kerry Darbishire and Kim Moore to read alongside me. The evening also included supper at Brantwood’s café. The open mic produced some fine readers. It took place on November 3rd 2016 and was a great success! So much so that we’re repeating it in 2017!

Come and join us on November 2nd 2017 at Brantwood café Coniston. I have the pleasure of reading alongside Graham Mort, Kerry Darbishire and Kim Moore. There’ll be an open mic again, too! Contact Brantwood and get your name down for a slot – open mic places limited! 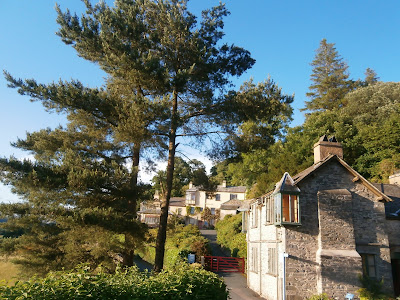 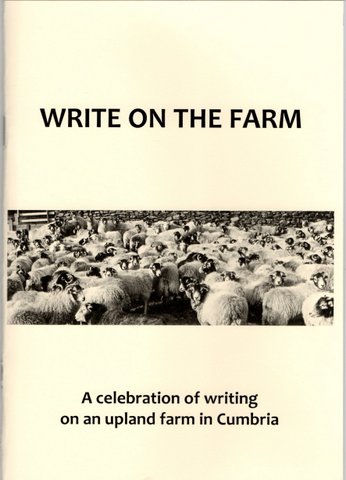 WRITE ON THE FARM

Each month, for the past six or seven years or so, I’ve been holding writing workshops, at first in my own home and a variety of local venues, such as Swarthmoor Hall and Bardsea Village Hall, until a friend and member of the writing group kindly suggested we hold the writing workshops on her farm. What a place for poetry and nature writing! Thank you Jane.

An upland farm near Kirkby Lonsdale, warm farmhouse kitchen, large living room where we hold the writing workshops, cosily snuggled down on winter days by a wood-burning stove, or enjoying the sight of swallows darting to and fro outside the windows as we write, discuss, laugh and engage with our writing. It’s a lovely gathering of like-minded writers, sustained by home made bread, chutneys, cakes, jams and anything else that the group may have baked.

It’s a friendly, supportive, professional and dedicated group of writers and I’m proud to have edited an anthology of their fine writing, called WRITE ON THE FARM published by Harestone Press, image by Stephen Darbishire. 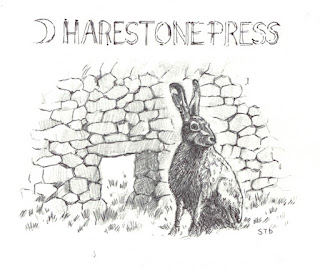 You can find out dates for the 2017 workshops here:

Poetry and the Harp: The first write on the farm workshop in 2017 is on February 25th. I’ll be co-tutoring the morning session with harpist and writer Christine Cochrane. All welcome!

Update: Poems from the Harp workshop will be published in Poetry Scotland, Autumn 2017, ed. Sally Evans - thanks Sally! 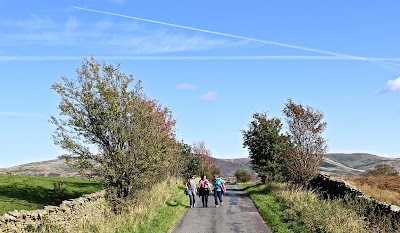 A couple of years ago I’d read something about Eycott Hill… about how Cumbria Wildlife Trust were planning to submit a bid to buy it and create a new nature reserve there. Now, I know Eycott Hill! We almost bought a house in Berrier – another story – and knew I’d read an article in the Keswick Reminder about the Singing Stones of Eycott Hill… a stone xylophone that’s in the Keswick Museum made of certain kinds of stones that make a sonorous ringing sound when struck.

With this in mind I contacted Cumbria Wildlife Trust – then thought nothing of it until a little while later I was emailed and asked: “Was I still interested in running creative writing workshops on Eycott Hill?” Was I!! Oh yes, delighted!

The upshot was a couple of workshops held on Eycott Hill, a wild fell composed of Eycott Volcanic rock close to Blencathra, remote, lonely and uplifting, a place to stop, reflect, listen and to write.  Two workshops were held, one in May 2016 and one in July 2016. Another is planned for 2018. 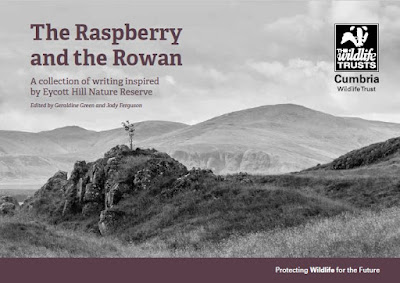 The writing produced on the workshops is so good that Cumbria Wildlife Trust have produced an anthology called The Raspberry and The Rowan. The title comes from the fact that only a wild raspberry and a ‘flying’ rowan remain after intense over-grazing by cattle. CWT plan to restore hay meadows, plant indigenous trees and to encourage people to engage and enjoy nature both the small: bog asphodel, moths, lichens and the large, Eycott Volcanics, the sky, expanse of hay meadow and the general airiness of place. You can download and also pre-order a copy from Cumbria Wildlife Trust, link here:

The Raspberry and the Rowan

The restoration of the Hay meadows, the purchase of the hill could not have been possible without funding through the Heritage Lottery Fund. Thank you, too, to Jody Ferguson of Cumbria Wildlife Trust. 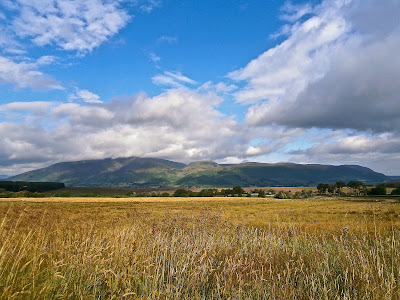 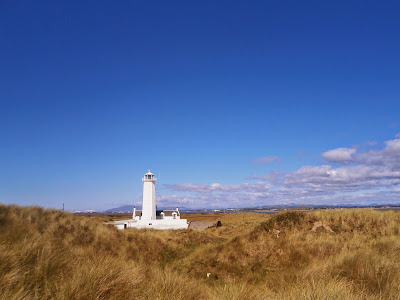 WRITE ON THE GONDOLA

One of my monthly ‘write on the farm’ writing group asked us if we’d be interested in taking part in a project with the National Trust’s Gondola on Coniston Water… naturally we all said yes please!

I arranged for our group to meet at Brantwood, spend the morning on the Steam Yacht Gondola and the afternoon on a writing workshop at Brantwood. We wrote in response to our sail on the wonderful Gondola – if you’ve never been on it, do take a ride!

The resulting poems were recorded in situ on the Gondola a month or so after our workshop day. Some of us read our Gondola poems at the Open Mic night at Brantwood last November. There are plans afoot to share the poems in other ways later this year…

Big thanks to the National Trust, especially to Jo Haughton and all the crew of Steam Yacht Gondola. 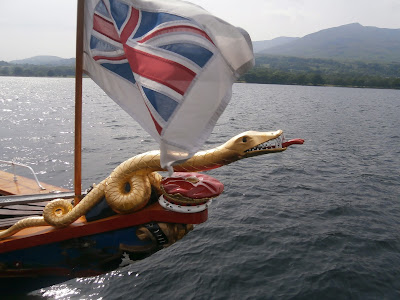 It’s a great honour to be an Associate Editor (UK) of the online poetry magazine, Poetry Bay. Based on Long Island NY, this is one of the longest running online magazines, editor George Wallace, you can
read poems here this issue contains a special feature of UK poets.

Delighted to run a workshop for Bank Street Writers Bolton, September 16th 2017! And to be invited back to run another one for them in 2018!

I'm also delighted to be teaching another adult education class at Dallam Community Centre, Heversham. It's the fifth year I've taught them. Last term the workshops were titled "Exploring Poetic Forms"and an anthology celebrating participants' work was produced by Dallam.

The new term, which starts on Thursday, 19th January 2017 10am-12 noon, will look at how to draft and craft your writing, poetry and prose. Called "Drafting and Crafting - How to Shape your Writing" it runs for ten weeks - all welcome, booking through:

So! All in all a positive year with plenty of exciting new projects rubbing shoulders with long running workshops and courses – and more planned for 2017!

"Geraldine Green’s poems are alert to landscape, seasons, rootedness that draws from deep aquifers of language, change that flits like cloud shadows across the page. Some seemed light as thistle heads but proved enduringly strong, rich with seed. As I read, I almost expected goldfinches to feed alongside me with their otherworldly attentiveness. But that attentiveness was all hers.”
- Graham Mort

Salt Road (pub. by Indigo Dreams)
"Geraldine Green’s passion for and knowledge of the natural world and its spiritual energies has its roots and takes its cue from home ground, her native Cumbria.  She has noted her ‘long and deep connection’ with Cumbria. She draws inspiration from light over water, tidal energy, the intent of the land combined with rich tellings of family and local memory.  But her poems and prose-poems also travel the roads and the seas:  from Cumbria to Kansas, New Mexico, Spain, Greece, New York, Skye and Turkey. This poet takes her place in contemporary poetry with work that shines with joy in and respect for language.  The vitality of life’s many experiences are evoked here with all the senses.”  - Penelope Shuttle 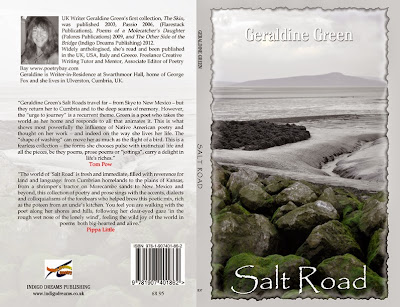 You can buy my books from my publishers Indigo Dreams Publishing, link here:

all photos copyright Geraldine Green, except for the Harestone Press logo by Stephen Darbishire (thank you Stephen) and the Brantwood posters

Posted by Geraldine Green at 03:56