“Everything that is interesting in nature happens at the boundaries” 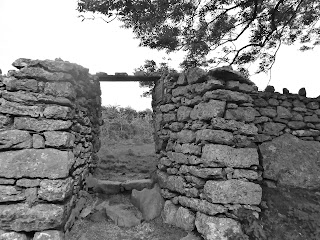 Some fine writing produced after our short walk on Birkrigg, overlooking the vast expanse of Morecambe Bay and north to the Cumbrian fells, then on to Sunbrick, the Quaker Burial Mound.

The entrance/exit into and from the 17th century Quaker burial ground prompted us to discuss edges/entrances from one space/time to another, boundaries between self and other, between waking and dreaming, between seasons marked by Celts and others through ritual, Imbolc, Samhain, Beltane, Lughnasadh, or space/time between past and present, recalled and recorded through poetry.

Here's what writer John Burnside has to say on boundaries and the space between:

“Everything that is interesting in nature happens at the boundaries”[1]
The spaces between the ‘self’ and ‘the other’ where everything takes place have long been a source of fascination for poets and myth-makers. … those Celts who once inhabited the British Isles … recognised a space which they called (in Irish) idir eathara that is, a boundary that is neither one place nor another, but the space between the two.[2]
[1] John Burnside quoting psychologist, Nicholas Humphreys http://www.hum.uit.no/nordlit/1/burnside.html
[2] http://www.hum.uit.no/nordlit/1/burnside.html

The outdoor session was rounded off by a drive to Roa Island with its views across the channel to Piel Island and its early 12th century Castle, then home for reflection and indoor workshop exercises, hot drinks and home made flapjacks.

For the next workshop please bring one A4 page poem/prose piece to be workshopped, plus a poem that means something to you, or a poet whose work you admire, for brief group discussion. There'll be more indoor workshop exercises and a short walk/explore outdoors, plus writing in response to boundaries, dreams and myth.