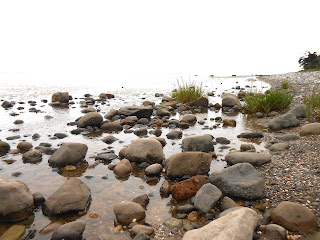 “The space between”: mediating between inner and outer worlds

This section explores how the mediating between, and the fusing of, inner and outer worlds is an attempt to mend the “broken drinking goblet like the Grail” (Frost in Edward Connery Lathem 1979: 379) and how poetry can be the ‘space between’, a virtual place in which writer and reader can explore and negotiate realities and identities. Seamus Heaney explores this issue in his poem ‘Squarings’, drawing attention to the fact that for a person living in one dimension, experiencing another can be a wonderful, if dangerous undertaking:

‘This man can’t bear our life here and will drown,’
The abbot said, ‘unless we help him.’ So
They did, the freed ship sailed, and the man climbed back
Out of the marvellous as he had known it
(Heaney 1995: 203)
Discussing his poem, ‘Squarings’ and George Herbert’s poem ‘The Pulley’ in The Redress of Poetry, Heaney observes that both his and Herbert’s poems “are about the way consciousness can be alive to two different and contradictory dimensions of reality and still find a way of negotiating between them.” He also refers to Robert Frost’s poem ‘Directive’ stating “that the imaginative transformation of human life is the means by which we can most truly grasp and comprehend it.” (Heaney 1995: xv).  The mythic, imaginative dimension of human experience is embodied in story, image and symbol.

Frost’s poem, ‘Directive’ uses the mythic and symbolic when, in the poem, his character imagines the Grail cup in the form of a ‘goblet’, albeit significantly broken and the ladder road - with its similarity to Heaney’s rope and anchor and Herbert’s pulley - as symbols of how we mediate between the inner and outer worlds through the creative process of poetry and how we attempt to fuse them. I would suggest that the symbol of the broken grail cup symbolises the broken human, who needs to be so in order to be made whole; or lost, in order to be found. This idea is at the heart of my poetics and is explored in such narrative poems as ‘Aunt Lucy, Brooklyn’ and is based on the concept of the spiritual pilgrimage, or “itinerant journey” (Robert Faggen on Frost 2008: 147)

The first two lines of ‘Directive’ suggest movement in and out as well as back and forth in time, as the narrator imagines a time of (seeming) innocence and imagines too, how we walk in other people’s footsteps along and down the passage of time:

Back out of all this now too much for us,
Back in a time made simple by the loss
Of detail

His repetition of the word ‘Back’ creates the effect of pushing the reader back into their own memory, to a time when the house was not the one inhabited by adults with all the cares, grief and responsibility which accompany adulthood, but a house of make-believe, a play-house that the children transform through their imaginations into a safe haven. But, through time the ‘dishes’ of the children’s make-believe home become ‘shattered’ ‘underneath a pine’ – anticipating the line further on in the poem of the ‘broken drinking goblet like the Grail’ which the narrator ‘kept hidden in the instep arch/of an old cedar.’ Both cedar and pines are evergreens and non-deciduous, keeping green perhaps the innocence of a child into the experience of an adult. Frost’s poem uses very simple, homely symbols to convey the complex message that in order to find ourselves we must first become lost:

And if you’re lost enough to find yourself
By now, pull in your ladder road behind you.
(Frost in Lathem 1979: 378)

For me, creating poetry is a way of mediating and understanding levels of experience and other dimensions, real and invented and how they connect, in order to explore identity. However, I find that the process of becoming attuned to the inner world is aided by being ‘anchored’ to the physical world. For example, noticing the small: lichens, beetles, bus tickets, bracken spores, as well as the large: mountains, seascapes, skyscrapers and sky, my eyes constantly panning from one to the other whilst simultaneously remembering past conversations, recalling people’s voices and their stories.

I find walking a form of meditation, for me the physical rhythm attunes to the interior one, past and present merging in the moment I sit at this keyboard writing a poem into which I draw rhythm of sounds, voices, memories and dislocated thoughts. I juxtapose unusual images to allow myself the luxury of going with free associations that eventually combine and cohere. The poem then becomes what Heaney has called “a single walker, stepping into the procession of language.” I feel the need to [as Heaney states] “get beyond ego in order to become the voice of more than autobiography” (Heaney 1989: 148).  But how can we as humans communicate to others a “moment to moment experience” when language, which mediates between our experiences, inner and outer, paradoxically acts as a barrier?  I am aware of this paradox when writing poetry.

Geraldine Green 11.2.2013, taken from my PhD thesis: "An Exploration of Identity and Environment through Poetry" September 2011