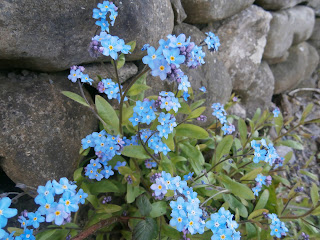 Five came to last Saturday’s workshop. And the sun shone.

I always have too many writing exercises and stimuli but that’s ok as I love the idea of having a framework prepared, yet be flexible within that framework – makes for an organic workshop – that’s the plan, anyhow!

Apart from switching the kettle on, making tea/coffee, handing out home made flapjacks or brownies in welcome, we always start by sharing writing from the previous workshops, reading it out and having the rest of us workshop a piece of prose, or a poem, extract from a novel, or a piece of writing by someone else they’ve enjoyed and want to share.

It works well, as it gives time for newcomers to settle into the rhythm of the day and get to know the group. We welcomed L. to the group, whom I’ve met before at other workshops and whose writing impressed me with its strength and mystery.

We spent longer than usual on workshopping writing, which was great, as it means that the group are well into writing, producing strong pieces of work that they’re willing and comfortable enough to share with others. Spurred on by hot drinks and laughter, not to mention sunshine, the morning flew by.  Here’s one of the exercises I gave, choose ONE of the following kicker lines and write in response – from which some very fine writing was produced:

And the barn was a witness fr. ‘The People, Yes’ Carl Sandburg p.89  ‘Harvest Poems’

Even this, this pelt, this shell fr. ‘Witch Circle’ Peter Redgrove p.36 ‘The Harper’

I had planned to theme the outdoor exercise around the idea of writing in response to something they’d not usually think of writing about – my idea was to go down to Canal Foot, look at slag banks, discuss how Glaxo Smith Kline was built on the site of old iron ore mines; walk by the canal, show them the cattle market, abattoir, or the stone pier by the Bay Horse with its massive iron capstans… write in response to the workplace, routine, factories, offices… or something we’d think of as ‘ugly’ (bearing in mind beauty is always in the eye of the beholder!)

I am so pleased that someone suggested we walk from home. I immediately said: “how about a walk along the lanes to Swarthmoor Hall?” The idea was taken up enthusiastically and six of us, plus Roy-dog headed off up the lane to the Hall – a short walk from home.

The day was fine, blue-skied, hot sun, blow-y washing-on-the-line drying kind of day – uplifting the spirits, hawthorn leaves greening the hedges and we entered the drive under the archway. 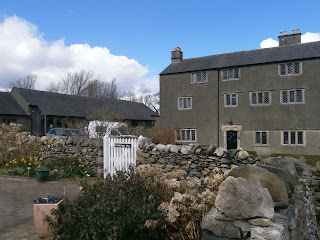 Jane was welcoming and said “Yes, feel free to wander around, There’re prints in the hall from the Printfest festival in Ulverston that's on right now, and make sure you see the ‘living quilt’ flower bed!” I had Roy with me so couldn’t go inside the hall or down the long garden into the wildflower meadow, but that was fine as it was hot, I had my camera and was content to sit in the sun, take photos and do nothing but reflect, saying to the group take as long as you like, have a think about who lived here, what their lives might have been like, what their stories might have been. Imagine people walking in the lanes and fields to come listen to George Fox preach from the balcony there – the one that's like something from Romeo and Juliet….

I gave them this exercise to do: choose an object, something odd, quirky, something ‘ugly’ (in large inverted commas!) and write in response, or write in that object’s voice, perhaps hold a dialogue with it.

We walked back through the fields, down to Springfield Beck and through the woods, pausing to pick wild garlic, take photos, throw a stick for Roy, discuss what we’d seen at the hall, ideas they had from the visit, something vivid that struck them… the woods were full of celandines and windflowers, bluebells not yet out, but still in bud and home to a warm room, full of sunlight. 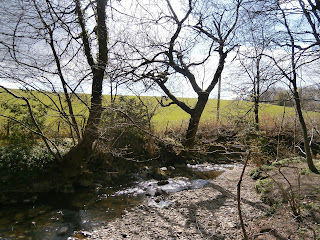 The group wrote like they wouldn’t stop! Always a heartwarming sight for a creative writing tutor to see! And they produced some great writing, a mix of poetry and prose, which I’m hoping will join writing by others in the group in a small anthology to celebrate nine months of workshops, beginning with a pilot one last year called 'Writing the Wild' held at Swarthmoor Hall and ending at Jane’s Farm on May 25th.

I handed round a poem by Naomi Shihab Nye called ‘Wandering Around an Albuquerque Airport Terminal’ and asked someone to read it out loud, which K. did beautifully. The day ended with J. sharing a song she’d written, hadn’t sung or played it before, but shared it with us. In a sunny room she sang and played her guitar. The group’s laughter and writing, sharing and trust energised our home. Thank you.

“Wandering Around an Albuquerque Airport Terminal.”

"After learning my flight was detained 4 hours,
I heard the announcement:
‘If anyone in the vicinity of gate 4-A understands any Arabic,
Please come to the gate immediately.”

Well—one pauses these days. Gate 4-A was my own gate. I went there.
An older woman in full traditional Palestinian dress,
Just like my grandma wore, was crumpled to the floor, wailing loudly.
Help, said the flight service person. Talk to her. What is her
Problem? we told her the flight was going to be four hours late and she
Did this.

The minute she heard any words she knew—however poorly used—
She stopped crying.

She thought our flight had been canceled entirely.
She needed to be in El Paso for some major medical treatment the
Following day. I said no, no, we’re fine, you’ll get there, just late,

Who is picking you up? Let’s call him and tell him.
We called her son and I spoke with him in English.
I told him I would stay with his mother till we got on the plane and
Would ride next to her—Southwest.

She talked to him. Then we called her other sons just for the fun of it.

Then we called my dad and he and she spoke for a while in Arabic and
Found out of course they had ten shared friends.

Then I thought just for the heck of it why not call some Palestinian
Poets I know and let them chat with her. This all took up about 2 hours.

She was laughing a lot by then. Telling about her life. Answering
Questions.

She had pulled a sack of homemade mamool cookies—little powdered
Sugar crumbly mounds stuffed with dates and nuts—out of her bag—
And was offering them to all the women at the gate.

To my amazement, not a single woman declined one. It was like a
Sacrament. The traveler from Argentina, the traveler from California,
The lovely woman from Laredo—we were all covered with the same
Powdered sugar. And smiling. There are no better cookies.

And then the airline broke out the free beverages from huge coolers—
Non-alcoholic—and the two little girls for our flight, one African
American, one Mexican American—ran around serving us all apple juice
And lemonade and they were covered with powdered sugar too.

And I noticed my new best friend—by now we were holding hands—
Had a potted plant poking out of her bag, some medicinal thing,

And I looked around that gate of late and weary ones and thought,
This is the world I want to live in. The shared world.

Not a single person in this gate—once the crying of confusion stopped
—has seemed apprehensive about any other person.

They took the cookies. I wanted to hug all those other women too.
This can still happen anywhere.

Not everything is lost."

Posted by Geraldine Green at 07:37