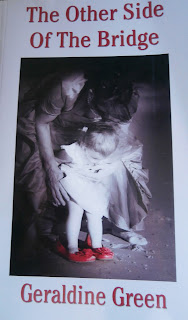 REVIEW OF ‘THE OTHER SIDE OF THE BRIDGE’ – GERALDINE GREEN
BY PATRICK B OSADA, ISSUE 47 OF SOUTH MAGAZINE:

Geraldine Green is a poet who is not afraid to experiment with poetic structure. Her most effective poems benefit from a close marriage of content with form, her subject matter vivified through a judicious use of language, rhythm, musicality and line-break.

Much of ‘The Other Side of the Bridge’ documents the poet’s travels in Europe and North America. However, it is of her native Cumbria that Geraldine writes most affectingly. L.P. Hartley famously wrote … the past is a foreign country and it is Geraldine’s travels to the Whitehaven of her grandparents and scenes from her own youth that, for me, are most memorable. Here she captures the breathless exuberance of juvenescence:

“legs swinging and us licking ice creams
on the submarine dock our platform shoes
cool and wonderful and the men whistling
and shouting hey love gi’e us a lick!”

Writing about her grandmother, Geraldine reverts to a more “traditional” form:

“This was her Whitehaven, she said, with its sugar tun and docks.
That’s where she gathered coal from the beach
Hands red and gnarled with washing for twenty kids.”

(“Over there was Grandma’s house”)

In the same poem, her eye for detail brings the past vividly alive:

“… That stone was where
Granda’d knock dottle from his pipe …”

However, Geraldine’s experiments with form occasionally produce less convincing poetry, particularly when she uses the page as a kind of canvas for the spatial arrangement of words, phrases and lines … When this happens, structure takes over to the detriment of meaning …

the      wind
blown in
on the
back
of the
green

(‘Poem of a mole catcher’s daughter’)

Despite this reservation, there is much to recommend this thoughtful and diverse collection – a book that can only enhance Green’s growing reputation.”


Thank you Patrick B. Osada, for a thoughtful and insightful review. I do enjoy, and I’m not afraid of, experimenting with poetic structure, for example when one is differentiating between the past and the present in a poem – how to convey that to a reader? After many experiments, such as indenting the past remembered voices or putting them in italics, I decided to slightly indent the present reflective voice of the speaker, using gaps in the text to denote the fragmentary nature of human memory.

In my poem 'In all that wide ocean' spaces between words were used to denote the speaker/poet's persona recalling a dream, the gaps in this instance mimicking the long pauses as one is attempting to recall elusive dream imagery and meaning.

One of the first reviews of my first pamphlet collection ‘The Skin’ (Flarestack Pubs. 2003) was by Giles Darvill of SOUTH magazine, Issue 29:

"THE SKIN is the volume for me. The Keswick poet approaches the same territory as is entered by mystics Rumi the Sufi and St John of the Cross - where the everyday world remains hard and baffling but transformed by dazzling darkness. I love its ambitious scope and absence of literary-ness (you won’t find Testament texts).

Geraldine Green has to invent her own language to express her wonder and pity for the wasted world and its oiled words. The word, like the person, must die to be reborn. Readers too must submit but also bring their own courage to share in creation.

The dark-light paradox is not resolved but faith prevails:

we will know what the shapes mean.’

I would like to hear Geraldine Green read that last line."

[note: Giles Darvill was quoting from my poem 'In all that wide ocean' which you can read at the end of this blog post]

“My assignment was to review only three from the 20-odd small press publications sent to me, but before signing off, let me recommend a small blue booklet titled The Skin by Geraldine Green, from Flarestack Publishing in Birmingham. Green’s gift for poetry is naïve – or perhaps the right word is natural – in a way I would have thought impossible these days. Though she writes in free forms, her poems kept reminding me of WHDavies’. She writes a good deal about angels (a fashion these days) and about love and the land, but there’s a freshness about her work that brought tears to my eyes. Real tears, like a child’s.” -- Anne Stevenson, Mslexia OctNovDec 2003

With thanks to Professor Graham Mort and Dr. Lee Horsley my PhD supervisors at Lancaster University who thoroughly, patiently and rigorously read and re-read the poems in 'The Other Side of the Bridge'.

Thanks, too, to John Burnside and Tom Pow for being such attentive and encouraging PhD examiners who gave me exciting suggestions for my next collection.

‘The Other Side of the Bridge’ is available from Indigo Dreams Publications, weblink here:

My next collection, ‘Salt Road’, will be available later in 2013, by Indigo Dreams Pubs., ed. Ronnie Goodyear. For anyone with an interest in dialect poetry you can read extracts from 'Poems of a Mole Catcher's Daughter' on Professor Jerome Rothenberg's web page:

Here's the poem in full that Giles Darvill quoted from:

In all that wide ocean

I remember only the grounds that wandered with me in my dream.

we will know what the shapes mean.

Posted by Geraldine Green at 23:50